One of the most imposing machines in CrossFit and with the worst reputation.

Let's talk about the GHD and its use in CrossFit.

What is a GHD?

Obey the initials of Glute Ham Developerwho is Spanish would be a gluteal and hamstring developer.

One of the most voluminous machines in the box, it has a large base to make it safe, a padded part where to put the legs and two locks to immobilize the feet.

Benefits of the GHD

This apparatus is designed to develop the strength of the posterior chain, lumbar, gluteal and hamstring muscles.

The exercises that can be performed on it are the famous accessories that help to compensate forces and prevent back injuries.

On the other hand, despite the clear benefits of using GHD, it has a bad reputation for being harmful, especially when doing sit ups.

And in reality, as in most cases, the problem lies in the execution technique.

When the training pattern indicates high volumes and you work for time, you are more likely to lose control of the exercise and potentially hurt your back.

When the athlete performs the repetitions in a controlled manner, activating the core and without hyperextending the back, there is no risk of injury. That is why it seems to make more sense to do this exercise with sets and repetitions as strength training, and not so much in the middle of a WOD where time is short and repetitions can be very high.

It is also recommended to train sit ups progressively:

Exercises to be done on the GHD

This is the most popular exercise performed with this machine.

It consists of sitting on top of the padding, with the buttocks off the surface, starting with the knees slightly bent.

The athlete drops his upper body backwards and touches the ground or "the target" at a given height off the ground.

Again, the athlete should stand up and touch the foot lock.

The range of motion in GHD sit ups, unlike when performed on the floor, is wider and allows full extension of the spine while stretching the rectus abdominis.

This exercise performed correctly involves a lot of abdominal work due to the eccentric work together with an isometric contraction.

The rectus abdominis is forced to develop great strength in order to keep the torso straight and avoid hyperextension.

The CrossFit Level 1 course specifies that coaches should initially assist clients and shorten the range of motion in the GHD sit-up.

A good progression would start with mastering sit ups on the floor with ab mat, before moving on to GHD where the range of motion and therefore the intensity of the exercise is considerably increased.

It is one of the versions we have seen at CrossFit Games.

Use a medicine ball and use it to touch the start and end points of the course.

This exercise is often done on the floor when a GHD is not available, but ideally it should be done with the machine.

The athlete, instead of getting into a seated position, places his knees at the edge of the padded area and his feet inside the locks.

The exercise consists of lowering the upper body while keeping the back neutral up to the point where the athlete can perform the recovery.

In this movement the hamstrings work eccentrically, at the moment when the return to the initial position begins, the muscles work concentrically.

If the exercise is too difficult, in the same way that we use rubber bands to assist in pull ups, you can help yourself with an elastic band.

The more advanced option would be to hold a disc between your hands to add more intensity.

This exercise is performed by flexing in the opposite direction to the sit ups.

The athlete should be placed face down, feet on the locks, quadriceps resting on the padded area and hip out to allow movement.

Start hanging and look for maximum hip extension without bending the back, trying to reach parallel with the floor or slightly higher.

In this case, the glutes and hamstrings are responsible for lifting the torso, while the back erector muscles and abdominals keep the back neutral during the exercise.

Hold a disc between your hands and keep it close to your chest.

The even more advanced option is performed with a bar on the trapezoids.

Starting from the final position of the previous exercise, hip extension, keep the body with the knees and hips extended.

The exercise works the same muscles as in the previous exercise, but isometrically.

The development of isometric back strength is a great advantage when performing weightlifting exercises.

As with the hip extension, you can hold weights to add more intensity.

If you want ideas of some of the WODs with GHD.

Even so, in the boxes it is not common to perform GHD exercises within the WOD since there are only 1 or 2 machines for the entire class. It is usually used in Open classes and within strength training.

If you are one of those who like to keep everything written down: workouts, PR, weights, Heros... This WODs notebook is for you.

How much does a Glute Ham Developer cost?

At home we have the Fortified GHD from Kingsbox, which is priced at 766€.

On their website they have several models and you can get a discount by using the code Anabelpump. 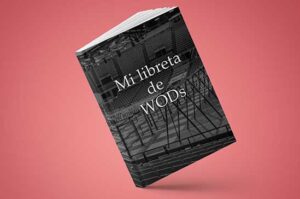 We use our own cookies for functional purposes and third-party cookies (Analytics type) to learn about browsing habits and provide better information service. To continue browsing it is necessary to accept them. You can configure, disable or read more by clicking on More info.
More info Accept